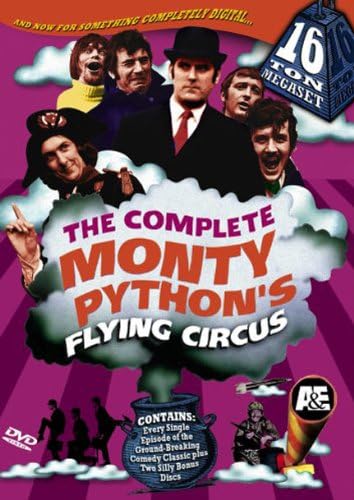 New for 2005, The Complete Monty Python's Flying Circus 16-Ton Megaset"span" packs together the original 14-DVD megaset with the two-disc Monty Python Live"span" in space-saving Thinpaks. While more cautious fans may want to pick and choose among the previously released individual volumes of Monty Python"span" for their collection, true Pythonites will want to own this definitive megaset that contains all 45 episodes (in chronological order) of Monty Python's Flying Circus. This "persistently silly" collection encompasses three-and-a-half seasons of dead parrots, cross-dressing lumberjacks, loonies, upper class twits, and spam, spam, spam, spam, spam, spam, spam, baked beans, spam, spam, and spam. Click past the occasional clunker and go directly to such signature sketches as the Ministry of Silly Walks, the Spanish Inquisition, the Fish-Slapping Dance, the Dead Parrot Sketch, the Lumberjack Song, the Cheese Shop, the Argument Clinic, and Nudge, Nudge. Taken as a whole, one marvels at how Graham Chapman, John Cleese, Eric Idle, Terry Jones, Michael Palin, and Terry Gilliam thoroughly subverted television convention with "something completely different," like sketches with no punch lines ("Your average TV viewer isn't going to understand this"). A warning to the uninitiated: there is much "material that some may find offensive, but which is really smashing." Violations of something called the "Strange Sketch Act" are the least of the troupe's offenses, as witness the Oscar Wilde Sketch, the Dirty Vicar Sketch, and the Most Awful Family in Britain Sketch, all of which achieve "the really gross awfulness" all Python fans are looking for. Say no more.

Monty Python TV shows, movies, records, and books are a time capsule of their anarchic lunacy. But more precious is an audience with Python, and as close as we can get is Live at the Hollywood Bowl, the long-sought-after 1982 concert film in which the Fab Six perform their greatest hits before a wildly enthusiastic crowd. Robert Klein moderates Live at Aspen, the irreverent 1998 U.S. Comedy Arts Festival tribute that reunited John Cleese, Eric Idle, Michael Palin, Terry Gilliam, and Terry Jones onstage for the first time in 18 years on the occasion of the troupe's 30th anniversary. Highlights include a shockingly funny moment involving Graham Chapman's ashes, and a joyous "Always Look on the Bright Side of Life" sing-along. Less essential is 1989's clip show Parrot Sketch Not Included: 20 Years of Python, which also does not include "The Oscar Wilde Sketch," "Cheese Shop," "Nudge-Nudge," and many other signature sketches. --Donald Liebenson